Anonymous play is backed up by the blockchain at CoinPoker. You can enjoy some of the top Poker variations here along with sports betting. CoinPoker has everything that a crypto player who loves Poker could want.

Risk Warning: dAppGambl does not constitute any investment or trading advice. Please carefully understand and evaluate the risks yourself before participating in any dApp 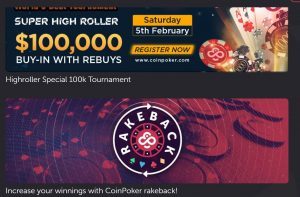 Like most online gambling platforms, CoinPoker has many promotions for its new and existing players. The various bonuses are an ideal way to boost the players’ bankrolls. Compared to other online poker platforms, CoinPoker has above average promotions and bonuses. The operator can increase the promotions by including daily offers, traditional welcoming bonus and even poker tournaments, which is common in most popular online poker rooms.

CoinPoker doesn’t have the traditional welcome bonus that most other poker rooms have. The online platform uses CHP so it lacks deposit match-type promotions. New players will not get any bonus or offer when they sign up at CoinPoker.

However, the site does have a Launchpad program specifically for new players. Launchpad allows new players to activate a ‘mission’ within three days of successfully signing up at the platform. It includes 25 missions that players must complete within 25 days. Every mission comes with a unique prize and is designed to help new players familiarize themselves with the platform’s user interface.

New players who complete the 25 missions get a $125 bonus. The available popular rewards of the mission include:

The missions need to be completed within 24 hours of being activated. Players have to wait 24 hours before the next mission is available. Below is a list of some of the available missions in the Launchpad promotion:

New players should read the terms and conditions associated with the Launchpad promotion.

Below is a list of the available promotions at CoinPoker.
Crypto Series of Online Poker: The 10-day tournament series has two daily events. The tournament takes place twice annually (spring and fall). The cash prize ranges from 0.01 to 0.35 USDT.

CoinPoker doesn’t have a traditional VIP program for its players. Instead, loyal players get rewarded by the CoinPoker rake-back program. When wagering on the CoinPoker platform, a percentage of the bet is raked back by the platform.
Players playing Hold’em, PLO, OFC game tables, Spin & Go’s and tournaments at the platform get rewards. CoinPoker awards players every Monday. The 30% rake back offered by CoinPoker is paid out using CHP. Players need to make community contributions using CHP to be eligible for the program.

CoinPoker is a crypto poker platform. Players who use CoinPoker can use cryptocurrency wallets like MyEtherWallet.com, Mist or an Ethereum wallet to make banking transactions on the platform. The following wallets are compatible with CoinPoker CHP:

Players are required to purchase CHP on a trusted platform. If you already own ETH, CoinPoker can easily convert the ETH to CHP. CoinPoker has a list of the recommended exchanges that their players should use:

Apart from CHP, the platform supports USDT as the other available currency. However, when exchanging the CHP tokens, players can exchange them into Bitcoin, ETH and fiat currency. CoinPoker doesn’t have any minimum or maximum deposit limits.

CHP tokens are speedily transferable. This makes the withdrawal process to be speedy and straightforward. Players are required to move the CHP tokens into their player’s account. After that, they can convert the CHP coins into fiat currency, ETH or Bitcoin.
When withdrawing, the funds are sent to the same crypto wallet you used when depositing into your CoinPoker account. Players using the CoinPoker platform can only withdraw a minimum of 5 USDT.

The game selection in CoinPoker is focused on poker. However, CoinPoker recently launched a sportsbook platform for sports betting enthusiasts. The CoinPoker sportsbook covers various sports ranging from football, basketball, tennis and martial arts. Punters can wager on pre-match and in play sporting events. Players can enjoy many Hold’em and PLO poker games and sports betting on desktop and mobile devices.

Unfortunately, CoinPoker doesn’t have a live casino, esports and provably fair games. The operator does not provide information about the odds and house edge.

CoinPoker uses a blockchain equipped with Random Number Generator (RNG) software. The RNG system is a decentralized card shuffling algorithm that ensures that every player’s final shake value at the poker table is random and fair.
Additionally, the platform has an anti-fraud system and fair play, ensuring that players don’t use third-party software when accessing the platform. This eliminates any automated or unethical play.

CoinPoker started real money wagering in 2018 after being launched in late 2017. Unfortunately, there is no information about the licensing of the platform. Players can access the following CoinPoker social media platforms:

On the CoinPoker platform, one can easily find details about the team managing the platform and other vital individuals helping in the platform’s operation. It also includes advisors, ambassadors and partners. CoinPoker has partnered with the following companies:

Additionally, players can get more information from the FAQ page. The platform is accessible via various languages ranging from English, Spanish, Italian and even Portuguese. Additionally, the CoinPoker platform has a large community accessible on various social media platforms. The support is responsive and accessible 24/7.

Even though the platform lacks a traditional welcome bonus and VIP program, CoinPoker is one of the online poker sites that has been growing in popularity over the years. CoinPoker has special player populations and software compared to the other crypto poker rooms.
The platform also has a layer of variance thanks to the proprietary CHP token. Plus, with the decentralized shuffling algorithm, players enjoy fair gameplay.
CoinPoker has a unique value proposition that many online poker enthusiasts look for in poker rooms. The platform offers various poker games to play and different sports to wager on at the sportsbook. However, there are no other online casino games on the platform.
CoinPoker provides poker enthusiasts with a safe and secure platform to play online poker games and bet on various sports.

What are the available customer support options for CoinPoker?

Players can reach the CoinPoker support via email ([email protected] ) and Telegram Chat.

Which currencies can you exchange the CHP tokens with?

What is the CoinPoker welcome bonus?

CoinPoker doesn’t have a traditional welcome bonus. Instead, it has a Launchpad promotion for new players.

CoinPoker is not licensed or regulated in any jurisdiction. It clearly says in their terms and conditions that your use of their services is done at your sole discretion, and risk.